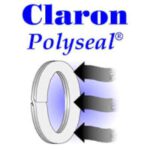 Claron style HBI is a single acting seal for gland applications using the same housing designs as Style CS6. The sealing element is manufactured in Polyurethane, with an Acetal anti-extrusion ring. Designed as a high pressure, low friction seal for use in second generation tandem sealing arrangements. The HBI seal is used on the pressure side, and a ‘low leak’ but higher friction seal on the non-pressure side to collect the oil film during the positive stroke. This type of arrangement is used where both low friction and low leakage are required. The seals high pressure resistance makes it suitable for use in heavy duty applications where shock loads and pressure spikes occur, as found in mobile plant equipment.

Refer to Appendix 1 for further information. 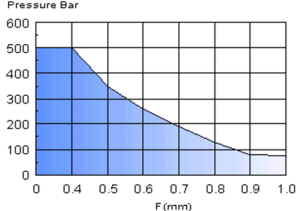 Note: Clearance gap F is the maximum permissable. i.e. gap completely on one side, in the temperature range of -30°C to 100°C The use of a suitably selected Claron bearing ring will effectively reduce the clearance gap F max. to a value closer to F/2 thus increasing the pressure capability of the seal.

For surface finish and recommended lead in chamfers refer to the illustration below. For housing dimensions and machining tolerances refer to the catalogue page of selected seal. Refer to Appendix 4 for value of tolerance symbols.

For the seal to function correctly, it is important that care be taken in fitting the seal within its housing. For a detailed checklist, refer to Appendix 3.