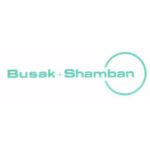 The rod sealing system is the most critical part of a hydraulic cylinder. Therefore it is expected that a rod sealing system performs under leak-free conditions in the static and dynamic state. Moreover it has to fulfil the lifetime of several thousand hours.

To meet these requirements, Busak+Shamban has developed the ZurconR L-CupR*, a highly effective and innovative rod sealing component.

Zurcon L-Cup is a trade name.

The advantages of the new Zurcon L-Cup design lead to the following improved properties:

Zurcon L-Cup can be used in all applications in which
previously a conventional U-Cup was applied, such as:

Another preferred solution for tandemrod sealing systems is the combination with the TurconR StepsealR K as primary seal and L-CupR as secondary seal, in conjunction with a double acting scraper.

The above data are maximum values and cannot be used at the same time. e.g. the maximum operating speed depends on material type, pressure, temperature and gap value.

Busak+Shamban’s experience in the production of hydrodynamic back-pumping seals such as Turcon Stepseal K, and the use of Finite Element Analysis (FEA) and other laboratory tests have led to the development of Zurcon L-Cup. The main objective in the development of this seal was the ability to achieve an optimum pressure distribution over the complete pressure range.

operating principles and function of Zurcon L-Cup is similar to the well-known Turcon Stepseal K.

In Figure 34 the friction values of a conventional U-Cup and of Zurcon L-Cup are being compared. A high increase in friction of the U-Cup is clearly shown between approximately 5 and 15 MPa. This is due to the U-Cup being totally pressed on the rod surface at increased pressure, causing elimination of the oil reservoir and dry running of the U-Cup.

In comparison, the L-Cup shows only a low increase in friction which is due to the smaller contact area and better tribological behaviour. The result is a very low friction heat generation. 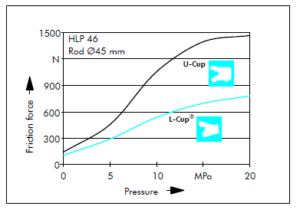 Surface microstructure reduces the effective contact area to the rod and therefore the breakout and dynamic friction are reduced compared to seals with smooth sealing surfaces. The hollow spaces between the peaks of the seal and the rod are filled with oil even during long periods without operation. When starting the movement after this period, a lubrication film is still present. This reduction of a large surface contact area into many small contact points also prevents excessive breakout friction and stick-slip.

During short stroke oscillation, oil is retained in the microstructures. This result would be unlikely with smooth sealing surfaces where full contact with the rod causes the oil to be pressed out.

The effect described above can be made visible by simply measuring the temperature. Figure 36 shows the increase in temperature on the rod surface caused by friction, measured at a pressure of 40 MPa after 20 000 cycles. This explains the prolonged service life of L-Cup. 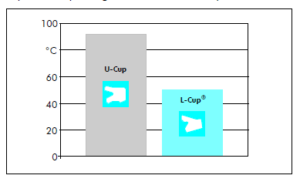 The recommended gap dimensions described in Figure 37, depend on pressure and temperature. 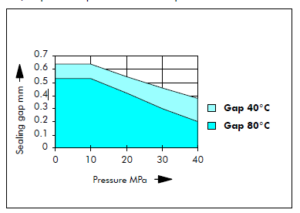 Lead-in chamfers
In order to avoid damage to the rod seal during installation, lead-in chamfers and rounded edgesmust be provided on the piston rods. If this is not possible for design reasons, a separate installation tool must be used.

The minimum length of the lead-in chamfer depends on the profile size of the seal and can be seen from the following tables. 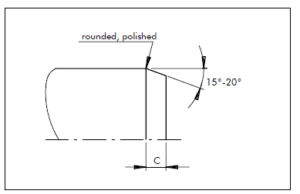